The most important month for the theatrical market since the start of the pandemic is almost over, and the results have been about what we hoped for, with a new release earning over $40 million on each of the first four weekends of October. The standout result, without question, was the $90-million debut of Venom: Let There Be Carnage, which was well ahead of expectations. The remaining releases during the month didn’t hit those heights, and Venom itself has declined fairly steeply, all of which amounts to a market prediction that’s exactly the same as when we started the month: $4.6 billion.

The biggest change in the prediction is that the model expects Venom to be the third-highest-grossing film of 2021, with a total box office of around $194 million. Personally, I think Eternals might beat it when all is said and done, particularly if the new Marvel movie plays well into the Holidays. But $200 million seems to be the new goal for films released in the theatrical market to hit “blockbuster” status, unless we see a major shift in theater-going habits.

So far, that’s not coming out in the data… 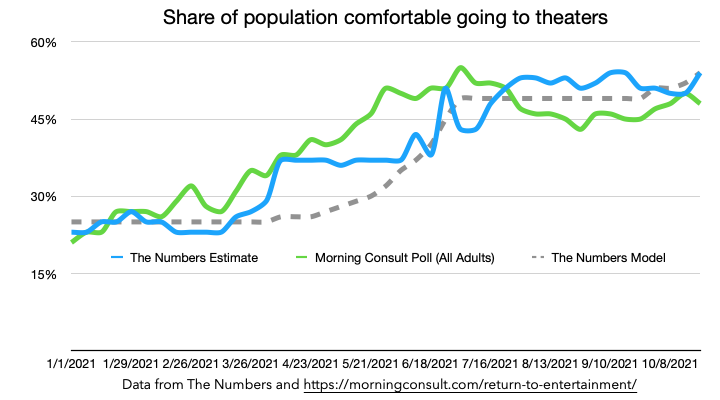 Our model’s underlying assumption is that 54% of regular filmgoers are now comfortable going back to theaters, which is right in line with what we’ve measured from recent films, including last weekend’s debut of Dune. Morning Consult’s surveys are giving a slightly lower number—48%—but that share seems to be drifting up now that we are mostly past the Delta wave of the pandemic.

Based on what we’ve seen in October, I won’t be making a change to the “comfort index” part of our model. November will be crunch time for that, since the model projects that 63% of the regular audience will be comfortable going to theaters by Thanksgiving. That substantially boosts the prospects for a film like Encanto that’s coming out at Thanksgiving. While there’s good reason to believe that people will get more comfortable going to theaters over time, November will be a big test of how quickly that’s happening.

Among individual movies, the big result for Venom is by far the highlight of the month. Dune is underperforming the model’s prediction from a month ago, but at that point we weren’t adjusting for its simultaneous release on HBO Max. Once that’s factored in, it’s performing nearly in line with expectations. Note that now we are making that adjustment, The Matrix Resurrections’ prediction has come down a bit, to around $150 million in total.

Overall, the really big news in all of this is that October saw a significant pick up at the box office. Our model predicts a bit of slow-down in November, but the key thing to watch will be how many films outperform expectations, even if they’re opening with $20 million, not the $40 million that we’ve been seeing in the last few weeks. Without question, Eternals will be the film whose numbers I’ll be looking at most closely. An opening in excess of $70 million would be good news, but it has the potential to do more than that, based on what Venom was able to achieve.

Our market prediction is based on the same model as the weekend predictions that we’ve been running since theaters started reopening towards the end of last year. We are now running the prediction model for every announced wide release on the release schedule and estimating the size of the market as a whole by assuming a relatively small amount of additional revenue from limited releases. The prediction for each movie is based on four factors:

The current state of the theatrical market. We update our model after each weekend with a wide release to estimate what proportion of formerly-regular moviegoers are currently going to theaters. As of today, that figure is 54%. We also monitor Morning Consult’s weekly survey of moviegoers, and may make adjustments to our analysis if our number varies significantly from theirs.

Adjustments for specific genres. The pandemic has affected different segments of the audience in different ways. We are currently using four categories of movie in our model: “date night” films (which are doing worse than the general market), action movies (which are doing slightly better), family films, and “everything else” (which includes drama, comedy, and horror movies, among others). Family films seemed to be doing the best in the early stages of the recovery but are now performing much more like other genres.

Adjustments for day-and-date streaming releases. Releasing a film on a streaming platform on the same day as its wide theatrical release does seem to reduce its opening weekend and overall box office. That effect depends on the streaming platform, and seems to be fairly small for Peacock, but larger for HBO Max. Currently, the model estimates that a simultaneous release on HBO Max reduces a film’s box office by 8%. No adjustment is made for other platforms at this time.

The expected recovery of the theatrical market as the pandemic is brought under control. The model assumes that the market will settle back to 70% of its pre-pandemic size at the end of the recovery. Growth will be slow at first, accelerate as more people become confident in going to theaters, and then slow down as more cautious moviegoers take time to return to attending. This is the classic ”S-shaped” curve seen in economics textbooks (and in many cases in the real world). (For more on this see my previous article, How quickly can the box office recover?) The model assumes that this recovery started on April 1, plateaued in July due to the wave in COVID in infections caused by the Delta variant, and will start again when cases wane at the beginning of October. Those parameters are likely to be adjusted as the market situation evolves.