It is a certainty to go to any concert of South Africa’s home strikes. And when it’s their regular annual concert, always held around November 17, something special can be expected. The first of three scheduled performances at the Lucerna Music Bar in Prague took place on Monday. And it was a celebration as it should be.

South Africa has been on the scene for more than three decades, but in a time when a lot of bands just shine and go out, they haven’t lost a bit of their uniqueness – and in many ways irreplaceability. And although the way to becoming a revival of oneself is simple and it is very easy to continue for only half the gas and so on, in essence, the formation with Roman Holý in the background is still relevant. The nine gentlemen on the stage know this – and so does the audience, which has created such an atmosphere in the Prague club that it is easy to forget the covid marasmus outside. With the academic quarter after the announced start of the event, the group flew to the podium with the tones “You’re still crawling” from the still last album “Escalation of Good”. After all, quite a lot of it was played. Songs like “When you run out of pervitin in front of Moscow”, “Zhublas”, “Jealous of Roman” fit smoothly among the older pieces. Concert guarantees “Bulháři”, “Hanka” or “I am comfortable” were connected with incorrectly non-radio pieces of the “Superpéro” type (which the musicians dedicated to all cimic monsters and stated that there is a bit of a risk to play this song and it should disappear from the setlist), “Metamegamastítko” or “Míša said about people”. 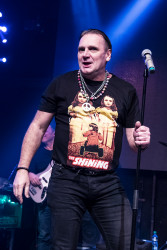 The balanced cross-sectional setlist basically offered no room to rest. Also because something was still happening on stage. Dan Bárta obviously enjoys most of all his projects in South Africa, Academic Rap Unit it gives him space to knock himself out, but at the same time he doesn’t have to limit himself in his abilities. Oto Klempíř played a concert with a kind of stoic calm, accurate in rap and singing, economical but strong in movement. Well, and finally the unguided missile Michael Viktořík, funny, amusingly self-centered, from time to time already a bit out of breath, but clearly dominating the not very spacious stage. Of course, the rest of the gang did. Result? A pressurized stream of unique energy that captivated, absorbed, and most of all entertained. This is easily forgiven even by a not very successful sound, in which mainly the vocals came together uncomfortably and the intelligibility was only partial and rather estimated. This group of people in their fifties enjoys it. It is visible and it is transmitted to the audience. We need bands like South Africa. They move on the edge of the mainstream and yet they do not give in to it and retain their approach, which is in stark contrast to the popular correctness. There is nothing sacred to these musicians. And that makes them a unique appearance. The next two concerts are sold out. Rightly so.

LIVE: The trade wind blows kind and JAR are still one of the most energetic bands in our country