In 1976, when Travis Bickle emerged from smoke and brass in a yellow chariot, he brought the archetype of the male martyr with him like a shadow. Taxi Driver writer Paul Schrader stayed obsessed with the archetype for almost 50 years of directing, reincarnating the very same soul in the body of Japanese author Yukio Mishima in Mishima: A Life in Four Chapters in 1985, and finding him once more in 2017’s First Reformed. From the perspectives of outcast, artist, and religious man, these three films offer a frame for Schrader’s work. Each of the characters exist on two planes: the physical, opaque world from which they are estranged, and their own mental one, as their philosophies hover above reality in narration. Their process of realisation comes from the desire to merge that narration with their life, and to bring their beliefs crashing to earth in violent action.

An insomniac personification of the city that never sleeps, Bickle stalks New York refracted through rain on a windscreen and decides that there is a putrid absence of beauty at every corner. Where it is found it must be preserved, where it is rotten it must be cleansed. Scorsese was able to strike at the archetype’s core from the first close-up of Bickle’s eyes scanning back and forth, introducing a judge with ambitions of jury and executioner. Almost a decade later, Mishima: A Life in Four Chapters begins here too, behind glass, as a child watches a world he cannot join. But the religious fervour of the archetype culminates in First Reformed, whose style is as ascetic as its protagonist.

Nothing in Pastor Toller’s life is illuminated by salvation. The 4:3 frame is flat, stuffy and awkward, and praying looks a lot more like whispering alone in a room. The organ in the church is broken and, in the centre frame, Toller reckons with a dying Earth as he reckons also with his polluted body and pideful mind (as above, so below). There is a sardonic bite to its nihilism, but First Reformed is almost self-flagellating in spiritual barrenness. Schrader aligns the viewer with Toller’s own grasping for salvation in the hope that if you lean into the film far enough – if you pray to it – it might just speak back.

Compared to the chewy quietude of First Reformed, Mishima’s stylistic trident is an aural and visual treat. Philip Glass’ score is an all-timer. Wind chimes ascend towards an arpeggiated sunrise, whilst enactments of the author’s fiction are ablaze in florid golds and pinks across ornate origami sets. It feels like a blush of the psyche under the strict martial exterior, or trad tableau of the two counter prongs, but Schrader’s harsh contrasting is the point – and the three-way contradiction splendidly shatters in convergence. Mizoguchi, the tortured acolyte in the first fictional vignette, warns that “beauty is poison”.

Accordingly in Schrader’s masterpiece, art bleeds into the fabric of life like blood through shoji paper. Yukio Mishima’s fanatic dedication to restoring Japanese honour and reinvigorating the pen with the power of the sword culminated in an attempt to stage a coup d’état in 1970. For Schrader, discovering Mishima must have been revelatory, the loner-turned-ubermensch who decides to enact his violent fantasies and meld his spiritual, artistic and political lives in a single sword swing. Mishima was the real deal: actual, factual Travis Bickle. The writer’s ivory tower also presents the perfect vantage point for Schrader’s self-ordained judge, as is the priest’s pulpit, as is the taxi cab. The director’s chair; the cinema seat. 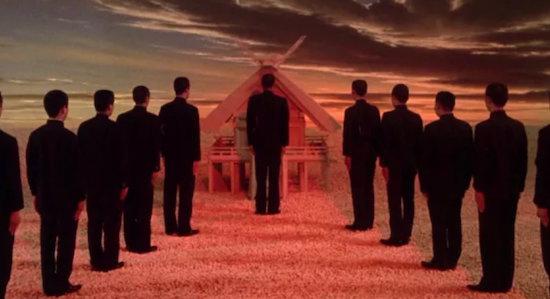 In 1971, Paul Schrader published a seminal theory on the spiritual ramifications of what he called “the transcendentalist style”, and it runs through his work like a river. The first of transcendentalism’s three pillars is the “scalpel of boredom” that the director wields to carve a painful habitual humdrum as the second pillar, “stasis”, forces the viewer to feel every lumping second. Then, the audience must witness a disunity between the protagonist’s spiritual lives and the world around them that ultimately drives towards a harmonising “decisive action”. The smatterings of this theory can be seen in both Bickle and Mishima’s dislocation from their environment, but it’s First Reformed that sees Schrader truly bridge the stylistic gap into the explicitly sacred, and into his own theory. It would feel self-important if it wasn’t so deft. Schrader manages to vindicate his theoretical musings and bookend a lifetime’s work in one nihilistic flourish.

His characters are life-artists. Bickle jigsaws an ideal version of himself together through the people he meets, accumulating philosophies like tacky souvenirs. A recurring motif of these “man in the room” dramas is the donning of a uniform: Mishima’s kitschy militia suits, Toller’s warrior priest cassock, and Bickle’s knight-plume mohawk. However, though he is able to greet parts of himself through creativity that would otherwise be stifled, Mishima claims that “words are insufficient” in the arena of action. Ever the masochist. If you can’t feel it sting the flesh, is it even true? Seppuku is the artist’s immaculate ending, allowing him to write his own final chapter on the world stage. No more rehearsals. Torn from his guts, language’s impotency is expunged. Meanwhile, any psychotherapist would be able to see that the miasma Bickle swears is stalking him does so because he believes himself to be unclean. There’s the rub: Schrader’s characters’ desire to permanently alter their worlds lead them inevitably back to themselves, and so their crusade must lead explosively from the inside out. 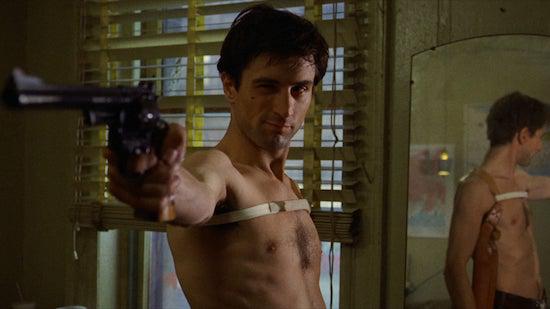 However zealous the destined climax, each character’s entry point is always recognisable. When Bickle declares it’s time to clean up his act and harden his body it echoes the kind of dramatic “I’ll do 50 push-ups tomorrow morning” reboot many of us falsely promise from the bottom of a crisis. Schrader wrote Taxi Driver as therapy whilst he drove around New York, reliant on substances, and with a gun in the glove compartment “just in case”. Bickle was born as an exorcism of the villain that lay dormant inside him. It’s proof that these films are about the firepower of ideas. First Reformed’s eco-consciousness strikes a scarily contemporary chord, and sometimes it feels as if Schrader is attempting to sketch what might happen if Travis Bickle had Twitter.

It may sound reductive, but it is the laptop’s white halo that ultimately becomes Toller’s portal to the cesspit of belief. We’ve been there. One long night on YouTube and the algorithm will usher you gently towards the doors of extremism. We sleep soundly at night, safe in the knowledge that this sphere is by-and-large all bark and no bite, but its nebulous promises loom nevertheless, and nowadays our ideas feel like they’re in a taut cold war with themselves.

It’s difficult not to see in Schrader’s subjects the DNA of those scores of men present in the shadowy recesses of the internet, where insecurity leads to indignation, and ultimately becomes a dangerous righteousness. In Mishima there’s the cult of personality and, in Bickle, the message-board frequenters who are drawn to them. In all three men’s obsession with bending the world beautiful, clean, or divine, there is more than a hint of the eugenicist. Yet Schrader’s ability to build such a traceable psychological map is what makes his oeuvre so fascinating. The question that compels the viewer is whether the onscreen arc is an ascent to salvation, or a fatal spiral to delusion. 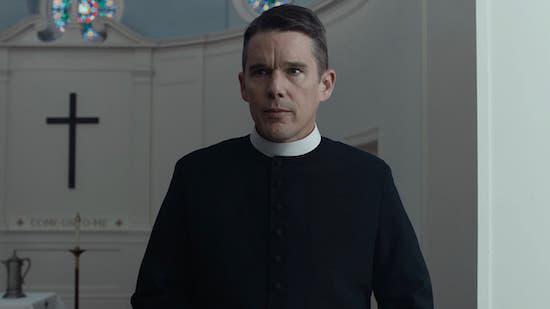 What is the difference between suicide and sacrifice? Seppuku is duty, it would be a dishonour not to carry it out. The Christian mind has more complicated notions of self-destruction, but Toller may just believe that his is in the name of the Lord. Loss of the spirit in devotion to a higher cause is honoured by loss of the body.

Death is always present for Schrader’s characters, but it’s never a threat – it represents a choice, a window to purpose that serves as the final transgressive point where body meets soul. By the time De Niro’s Travis Bickle warps into Ogata’s Mishima and is ultimately reborn as Hawke’s Pastor Toller, the trajectory of his characters’ lust for death is clear. This is not suicide, it’s martyrdom, and eternal harmony lies on the other side of its starry border.